We need to intensify.. I Can Help As I am Digital Expert 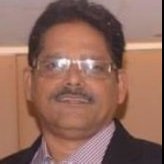