Who do you think the Anti-Christ is or will be ?

No, the elite wont be revealing him ......... The Antichrist will reveal  himself as God in the Temple of God, uttering great blasphemies against God.

they put his face on their money already.... 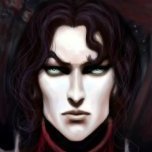