Shopping today with NO MASK - Liberating 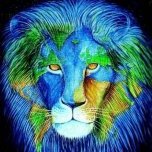